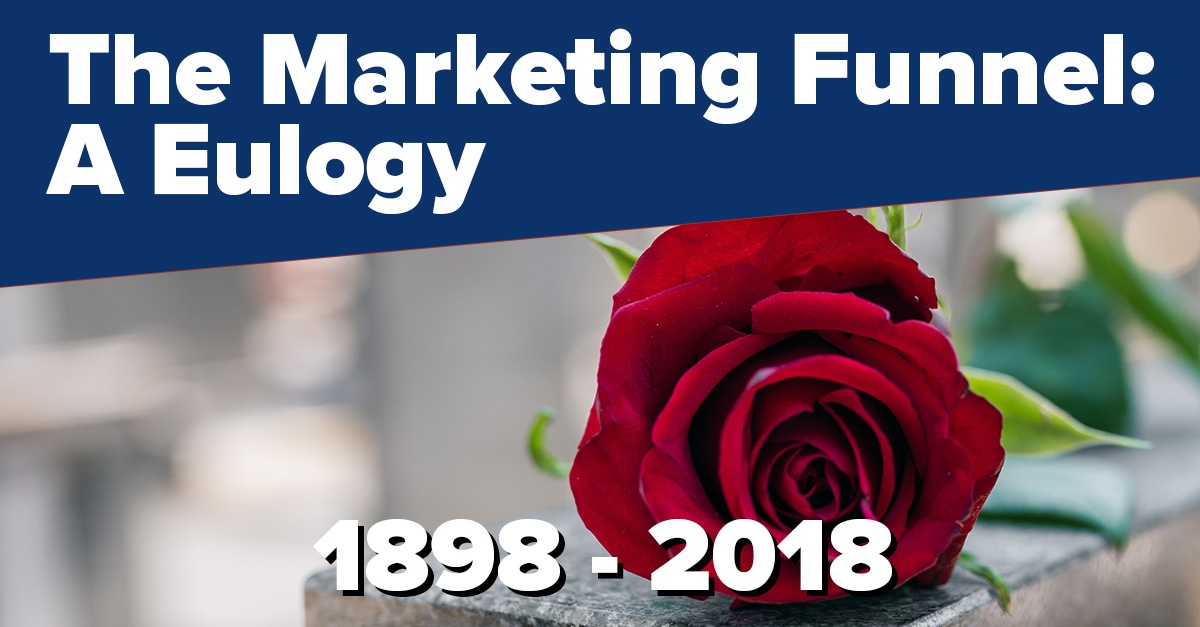 The Marketing Funnel: A Eulogy

Co-Workers, Friends, Family... We have gathered here today at Inbound'18 to bear witness to the life of our dear friend, who has departed this world for the unknown - a place beyond conversions and optimization. He was stalwart in his service to us, and the world - providing thousands of his adherents with the means to attract and convert. Listen to the conversations taking place in this room today, and you will hear stories of success and prosperity, triumph and glory - all because of our friend, The Marketing Funnel.

The Marketing Funnel was not always so revered... Though today he appears on countless slideshows, site pages and blog posts - and serves as the core conceptual visualization for companies like HubSpot, MOZ, Act-On and Forester - The Marketing Funnel had humble origins...

The year was 1898. The city of New York had just annexed the land from surrounding counties to become the second largest in the world - and is divided for the first time into the five boroughs of Manhattan, Brooklyn, Queens, The Bronx and Staten Island. The USS Maine explodes, sinking in Havana Harbor, precipitating an escalation to the The Spanish-American War. In France, Marie and Pierre Curie announce the discovery of 88th member of the Periodic Table - deeming it Radium.

...And in Philadelphia, a native born advertising executive - Elias St. Elmo Lewis - formulates the slogan "attract attention, maintain interest, create desire" to describe his methodology for advertising success. This was the seed that would grow to become The Marketing Funnel (who's formal conception was achieved one night when Lewis drunkenly stumbled upon a typesetter with a reputation for loose kerning in the back alleys of South Street*). Later Lewis adds a fourth term "get action," to capitalize on the desire he had stirred with his messaging. *Yeah, we totally made that up.

Lewis nurtured his baby, helping it grow through it's application at such accounts as the National Cash Register Company and Borroughs Adding Machine Corp. Eventually, through Lewis' regular cadence of scholarly publications, The Marketing Funnel gained a niche audience in the marketing and advertising world. Eventually Lewis passed on, but The Marketing Funnel was just getting started on what would become a century long journey towards being enshrined in marketing mythos.

Fast Forward 100 years: The Marketing Funnel might not look like the same gangly adolescent he once was. He has reinvented himself time and again, aligning with some of the finest operational and organizational methodologies around. Up until the moment of his untimely passing, The Marketing Funnel was always dressed for success. HubSpot Orange, MOZ Blue, Bizible Black - The Marketing Funnel had a suit to match every occasion. 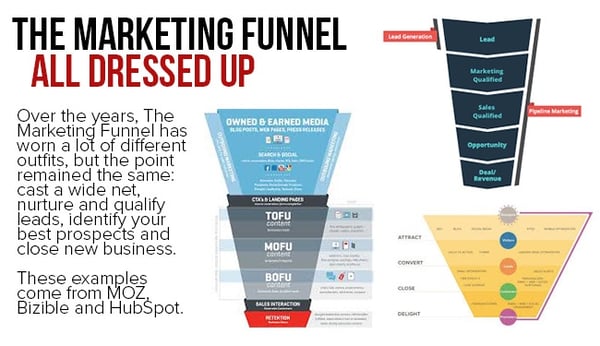 Even when people wanted him to change... "Let's make 'Attract Attention' 'Awareness' instead" - well, his core tenants were always there guiding us. Today, he's most recognizable as adapted to the modern "Attract, Convert, Close, Delight" stages of the Buyer's Journey, adopted by HubSpot - one of the countless adherents to The Marketing Funnel's fundamental tenants.

But alas, it was this giant - this HubSpot - that would be The Marketing Funnel's ultimate undoing. Et Tu, Brute? I guess it's true that it's the one's closest to you that end up stabbing you in the back. There was no greater champions of The Marketing Funnel than Brian Halligan and Darmesh Shah. It has been reported that for more than ten years, Halligan couldn't make it through a single meeting without drawing The Marketing Funnel on a whiteboard... These humble co-founders used The Marketing Funnel towards the end of his life to build an Empire, and just when they had achieved previously undreamed of levels of success - they abandoned him.

But they didn't just abandon The Marketing Funnel. No... That would be too easy: In some secret basement laboratory at 2 Canal in Cambridge Massachusetts, Shah & Halligan channeled their inner Drs. Frankenstein, extracting The Marketing Funnel's DNA to recombine, reconstitute and reimagine The Marketing Funnel. Though details of these experiments remain top secret, you can be sure that they left in their wake a menagerie of odd looking creatures that Dr. Moreau would be proud of. But success would find them yet again, and a new paradigm would be born from the ashes of The Marketing Funnel.

Finally, in finding the right mix of chemistry, linguistics, and pure marketing alchemy, the next leap in marketing's ever-charging evolution - The Flywheel - was born.

So, as we mourn one end, we celebrate a new beginning. And maybe, just maybe, the loss of The Marketing Funnel, while tragic, happened at just the right time...

So now, let's let Brian and Darmesh introduce us to The Flywheel, and put the final nail in the coffin of The Marketing Funnel. Enjoy the INBOUND'18 Keynote!

Want to Learn More About The Flywheel? Read this amazing article by HubSpot's Vice President of Marketing, Jon Dick.

BSP's Chief Marketing Officer Craig Cook is passionate about educating business owners about NetSuite & HubSpot, and expanding on opportunities for users. He is an expert on deploying HubSpot with SuiteCommerce, unlocking the power of an integrated solution. Craig is the host of the New York, Northern California and Southern California NetSuite User Groups.

Select your scope, answer a few questions, and we will quote a price for NetSuite based on your unique business needs.

Connect With BSP on LinkedIn

Meet our team of experts, and find out about our latest articles, tutorials, and webinars.

Learn more about leveraging ERPs to streamline your business with our video tutorials, recorded webinars, and virtual summits.